Brooklyn has a storied history when it comes to making music and, hailing from the borough that birthed Jay Z and The Notorious BIG, comes pop, R&B, jazz, and hip-hop singer, Tamara Bubble. Of course, the New York borough is also the birthplace of Aaliyah, and so it is only fitting that Tamara opens this six-track release with ‘Just Say No.’

With a production style that would have suited the late R&B star, Tamara uses the track to show her superb vocal talents, as she begins by telling a man to resist cheating on his girl, before warning women not to give in to the advances of an undesirable suitor… (cont.) 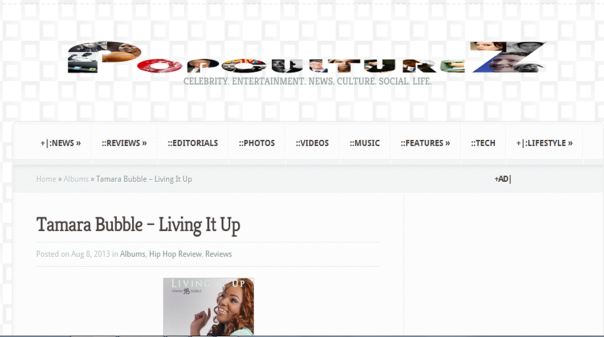 Picture the ultimate blend of Pop, R&B and Jazz, Soul and Hip Hop. Music that defies genre. Delivered with raw vocals and heartfelt emotion, Tamara Bubble creates timeless hits that will be around for years to come.
View all posts by Tamara Bubble »

Posted on August 9, 2013, in Entertainment. Bookmark the permalink. Leave a comment.