Tamara Bubble was featured on Episode 22 of comedian Jack Thriller’s cypher series “16 or Better” via Thisis50.com. See below for the final edited version of the cypher … but was this episode SABOTAGED OR NAH?!?!?!

Viewers and fans alike were shocked and confused at the cypher episode released on Thisis50.com as well as hundreds of other hip hop blogs … asking her about the performance??

Tamara viewed the video too and was also confused. Why would a LIVE series be edited so poorly (*ahem* … by Caged Cubez (credits below) and still released) to the point where viewers would question the skills of the talent featured?!?! Tamara Bubble responded with the “Director’s Cut” of footage from the actual LIVE taping [via Instagram] to show her “unedited” performance (click below). Viewers were relieved and demanded that Jack Thriller step up their editing team and overall production for “16 or better” cypher series. 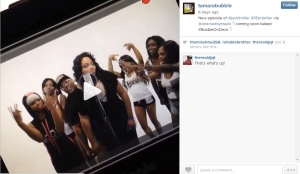 Tamara Bubble’s management also reached out to Jack Thriller and the production company directly to request that the video be corrected and re-released, but received NO response.

Makes you wonder … was it sabotage or nah? Leave a comment and tell us what you think!